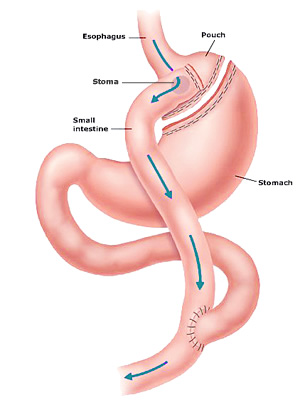 Gastric Bypass Surgery separates the stomach into two unequal compartments with less than 5% of the stomach remaining usable for food consumption. During digestion, the food empties from this tiny stomach pouch into the upper intestine.

Roux-en-Y gastric bypass surgery closes off the upper stomach and separates it from the remaining lower stomach below the staples. This creates a small stomach pouch about as big as a shot glass (one ounce/30cc). The upper intestine is cut with the distal end connected to the stomach pouch creating a stoma (or exit) from the pouch into the rest of the digestive tract. The end of the cut intestine is reconnected to the upper intestine at a measured distance below the stoma in a “Y” configuration.

Weight loss has been shown to occur more rapidly and over a longer period of time with gastric bypass as opposed to laparoscopic banding. The reasons for superior weight loss stem from the small degree of malabsorption caused by bypassing nearly all of the stomach and the first two feet of the small intestine. To date, weight loss with gastric bypass has been much more consistent than with other gastric restrictive procedures.

Our surgeons are ready to help you decide which bariatric procedure is right for you.

Yes, gastric bypass is a reversible procedure. However its reversal would require an operation of the same or greater magnitude and risk as the original procedure.

Gastric bypass surgery enables you to feel full while eating much less. Food to travels from the mouth to the esophagus to the stomach pouch through the stoma. It then moves into the rerouted intestine, bypassing a portion of the original intestine. This results in reduced calorie and nutrition absorption (malabsorption). Gastric bypass often allows patients to lose 65-70% of their excess weight within one year, with very few early failures.

This modification of the standard gastric bypass is available for patients who are “super obese,” — more than 200 pounds overweight. This operation adds malabsorption to restriction of intake. The stomach stapling component of the distal modification is the same as in the standard procedure. The only difference is the location of the distal connection of the intestine, which is reconnected much closer to the colon. While this type of  gastric bypass surgery can increase the amount of weight lost, it also increases the risk of several nutritional (metabolic) complications.

To request a consultation, please call 609.785.5870 or use the Book Appointment button below.