Penn Medicine Princeton Health Update on the Novel Coronavirus
If you have travelled to Wuhan, China or have been in contact with someone who has, please click here to read a Princeton Health update on coronavirus.
Click Here 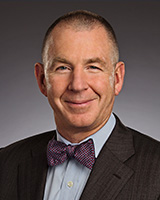 Dr. Denny has a Bachelor’s in Mathematics from the University of Pennsylvania (1973) and an MD from Hahnemann Medical College in Philadelphia (1978). He served an internship in internal medicine and a residency in diagnostic radiology at Yale-New Haven Hospital/Yale University and was co-chief resident from 1981-1982. He was appointed clinical fellow in cardiovascular radiology at the Brigham and Women’s Hospital and Harvard University School of Medicine from 1982-1983. From 1983 to 1985, he served as clinical assistant professor of radiation medicine at Brown University and was on staff at Rhode Island Hospital in Providence, RI. In 1985, he joined the faculty at Yale University and became Associate Professor, Clinical Director of the Department of Radiology and Chief of Interventional Radiology. Dr. Denny moved to Princeton in 1991 where he has served as Princeton Health’ Chairman of Radiology, President of the Radiology Society of New Jersey, and President of Princeton Radiology Associates. Dr. Denny has over 50 scholarly publications. He reviews manuscripts for several medical journals in the field of vascular and interventional radiology, and is a frequent lecturer at professional meetings and courses. He is a Fellow of the American College of Radiology, and a Fellow of the Society of Interventional Radiology.

Princeton Health International
About Us